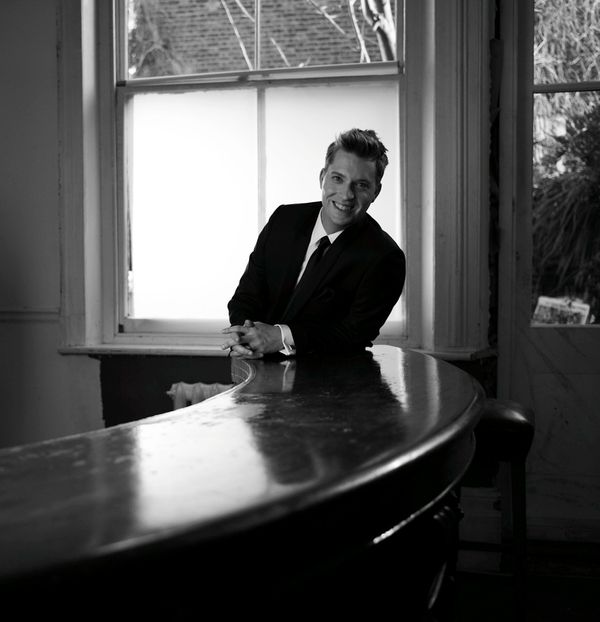 With a formidable combination of personal passion and disciplined craftsmanship, singer-songwriter Kevin Ahart is a consummate vocal interpreter who works hard to craft songs as strong as his coffee and well cut as his suit and tie. “I want my music to be very tailored,” says Ahart, “I write from a point of view in which the music and words must be crafted together to sound effortless.” Lyrically, he does not adhere to the usual themes of today’s generic pop hits, but strives for heartfelt, timeless music that’s rooted in a jazz tradition yet entirely his own. As comfortable performing with a spare two-piece combo as he is with a full orchestra,

Ahart possesses an effortless poise that many performers take decades to develop. His vivid musical persona isn’t just a pose that he’s adopted, it’s an honest reflection of his attitude towards life and of his abiding love for the music in which he’s been steeped since childhood. This love for the sound and style of American jazz, blues, and soul has spawned a vibrant creative vision that is the Kevin Ahart we see on stage. It is this passion that has fueled him throughout his career, taken him across the country, a tour in London, and even Grand Cayman Island opening for Chris Isaac. One of Ahart’s greatest highlights was performing in his hometown of Austin, Texas for the legendary Tony Bennett, finishing the night with a performance with Bennett’s own band, “It was a shock of excitement to perform in front of an artist I’ve admired so much in my life.”

In the studio, Ahart has had the privilege to work with a number of prestigious creative teams. His first studio call to London was to help showcase Acura’s new ELS Sound System with it’s designer, music producer and sound engineer Elliot Scheiner. In promotion of ELS, Acura’s film crew followed Scheiner and Ahart behind the scenes for their collaboration in recording Kevin’s “A Heart That Will” at AIR Studios. Later that year, in New York’s MSR Studios, recording began for Ahart’s album Let’s Take The World, as studio legend Phil Ramone produced Ahart’s cover of Willie Nelson’s “Nightlife” and the skillfully mastered duet “I Can’t Make You Love Me” with renowned jazz vocalist Jane Monheit. Completing the album in London, Ahart joined forces with fast-rising English producer Tim Ross and noted New York songwriter and jazz pianist Jeff Franzel. With ten memorable performances from the charismatic young artist, Let’s Take The World showcases Ahart’s expressive voice, carving out a distinctive musical identity.

Kevin Ahart continues to write original material from his new base in Los Angeles, California. “I feel very fortunate to have the opportunity to create music and share it with the world. Writing and singing are my greatest passions and I strive for authenticity in every song, I hope the listener can feel that.” Ahart concludes, “I definitely feel a responsibility to the tradition that originally inspired me to sing. I’m interested in adding something to that.”

I want to be known as a singer/songwriter. I don’t want to be another Buble or the next Sinatra. I want to shift the audience’s perception. I’m not a martini guzzling crooner, nor am I a guitar-slung-leather-jacket-wearing-beer-drinking “songwriter”. I like a bespoke suit, strong coffee and working at my craft. I want my life both personally and professionally to be tailored and minimal and I think that’s what my lyrics and persona should be.

I’m not necessarily a jazz singer, I’m a songwriter who likes to sing with jazz musicians – like Joni Mitchell in her later years. I’m also starting to write songs that are more socially conscious and not just about love or the many forms of love. The most important thing I want to accomplish is authenticity-personally, professionally, musically. I know I’m not the best singer or the best writer, but I like to think I’m good at both and getting better. And, I’m as comfortable on stage as anyone in the business.