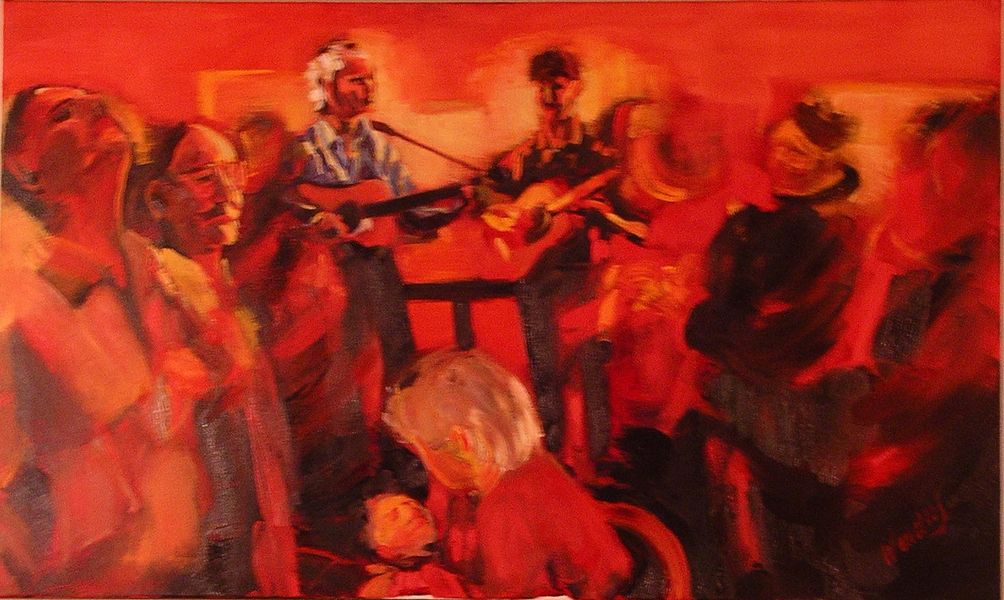 Gail Wendorf is a Texas-based, award-winning international artist, painting in oil, landscapes and figurative studies of dance and music from around the world. Wendorf’s academic background began at Southern Methodist University, Dallas, then to the University of California, Irvine, where she studied painting as a studio art major. Her lifelong interest in archaeology led her to California State University, Los Angeles, where she combined her love of painting and drawing with her interest in archaeology to create a unique degree program. Wendorf was awarded a bachelors degree in Archaeological Illustration in 1978. This allowed her to remain an artist while participating in the archaeology field. From 1978 to 1991, her work as an onsite illustrator took her all over the world. This global perspective has been a great influence on her life and work.

Wendorf’s next major achievement was a solo show with RB Ravens Gallery, Taos, NM in 1993. In 1996, she produced a solo exhibition in Fremantle, West Australia, in conjunction with the Artist’s Foundation of West Australia in their public space, the Moore’s Building. Titled Paintings of Multicultural Dance and Ritual, the work was about “aboriginal dance”. To her that didn’t mean just indigenous people; it was any spontaneous, gut level response to music or rhythm that she saw – a theme that continues today. In both her figurative and landscape paintings, whether painted on canvas or board, her goal is the interpretation of movement, light, colour and passion in the music, dance or landscape. Wendorf’s work helps the viewer be drawn into the emotionally charged atmosphere, living the landscape, the music and the musician’s passion.

Duncan R. Miller Fine Arts became interested in work Wendorf produced while on her first painting trip, autumn 1998, to Glenfinnan, Scotland. She has shown each year with the gallery since then. In 1999, Wendorf began Waltz Across Texas, a study of Dance Inside the Historic Dance Halls of Texas, (WAT) at the request of RB Ravens Gallery. A Preview exhibition of the work was held at the Texas state capitol by then first lady of Texas, Laura Bush. New Braunfels Museum of Art and Music’s inaugural exhibition, WAT in its entirety in conjunction with Dance Halls and Last Calls, opened May, 2003.

She has spent the past ten years living and working in Glenfinnan, Scotland. Painting the musicians, the ceilidhs, and the landscape that carries so much of the Scots’ passion for life. CEILIDH! has now been exhibited at the Scottish Parliament, at a charity exhibition for Mercy Ships at Kinfauns Castle, at Paisley Museum of Art, and most recently, at Radio France in Paris.

In the past few years, Wendorf’s interest in new places has surfaced again, and while she continues to enjoy painting ceilidhs and landscapes in Scotland, she has begun to explore new territory. So far, Tenerife, the French coast, and now Morocco have captured her imagination!

We no idea where this muse will take us next!

Gail Wendor’s online site can be found here. For more information contact Guest Public at 1+ 512.703.0426, or e-mail us at info@guestpublic.com.